Iceland is a high volcanic-risk area at an international level because its 30+ active volcanic systems generate relatively frequent and powerful eruptions. Closures of parts of the European airspace occurred in the explosive eruptions of Eyjafjallajökull in 2010 and Grímsvötn in 2011, with some disruption as well in smaller eruptions in 1991, 1998, 2000 and 2004. Iceland is capable of producing a wide spectrum of volcanic activity. This richness of magmatic activity is due to Iceland’s location on the Mid-Atlantic rift, spreading at a rate of 18-20 mm/yr. Interaction of the rift with a hot spot results in complicated plate dynamics with volcanoes in different tectonic settings (Figure 1). Many volcanoes are located under ice caps leading to phreatomagmatic eruptions, often generating plumes exceeding 10-12 km in height and carrying fine-grained ash to great distances. Seismic hazards are high in Iceland, in particular in the South Iceland Seismic Zone linking the Western and Eastern Volcanic Zones and at the Tjörnes Fracture Zone in north Iceland linking the Northern Volcanic Zone and the offshore Kolbeinsey Ridge. Series of up to M7 earthquake occur in these zones. 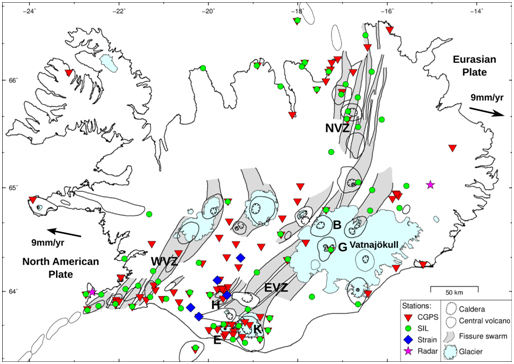 Monitoring - Progress beyond the state-of-the-art