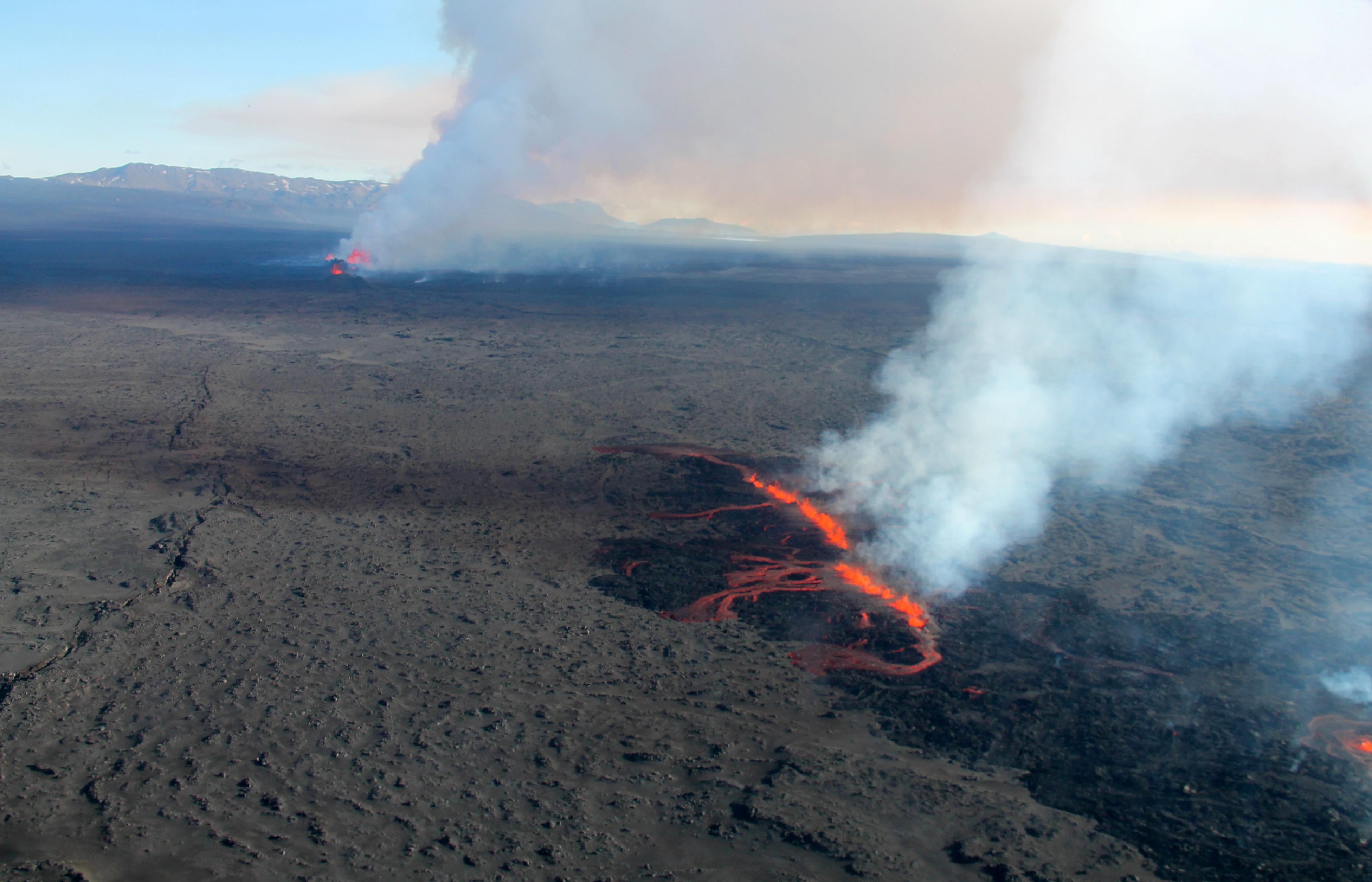 Advance online publication in Nature today reports research by an internal team of geoscientists on the formation of a dyke, a magma filled crack, extending more than 45 km in the subsurface from the Bárðarbunga central volcano to an eruptive site active for over 100 days.

An eruption in central Iceland in the Holuhraun area has now lasted over 100 days, with no end in sight. The eruption has received widespread attention and Icelandic and foreign scientists have followed the activity closely since its onset at the Bárðarbunga central volcano. With the help of joint interpretation of crustal deformation results, both from GPS geodetic measurements and interferometric analysis of satellite synthetic aperture radar images, and earthquake observations, a team of scientists has now a model for the formation of a major subsurface dyke in the later half of August. The dyke spans over 45 km distance from the Bárðarbunga central volcano to the Holuhraun eruptive site, where magma erupts.

The paper in Nature reports how the dyke formed mostly over two weeks prior to the onset of main eruptive activity.  The dyke has mean opening of about 1.5 m focused from just beneath the surface to 6 km below. The dyke volume grew to 0.5 cubic-kilometres before the main eruption began. A model for the dyke also explains unusual and varying direction of dyke segments, that relate to interaction of topography and stresses in the ground caused by divergent plate movements in Iceland.

The rate of dyke propagation was variable and slowed as the magma reached natural barriers, which were overcome by the build-up of pressure, creating a new segment. Lateral dyke growth with segment barrier breaking by pressure build-up in the dyke’s distal end explains how focused upwelling of magma under central volcanoes is effectively redistributed over long distances to create new upper crust at such divergent plate boundaries, the authors conclude.

The team hopes that similar studies could be carried out in near real time to improve understanding and ability to forecast the evolution of lateral dykes in various tectonic settings.

Photo: Faults and two eruptive fissures active on 5 September 2014 above the northern end of the segmented dyke that grew laterally in a rifting event at the Bárðarbunga volcanic system Iceland in 2014. (Photo credit: Thórdís Högnadóttir)